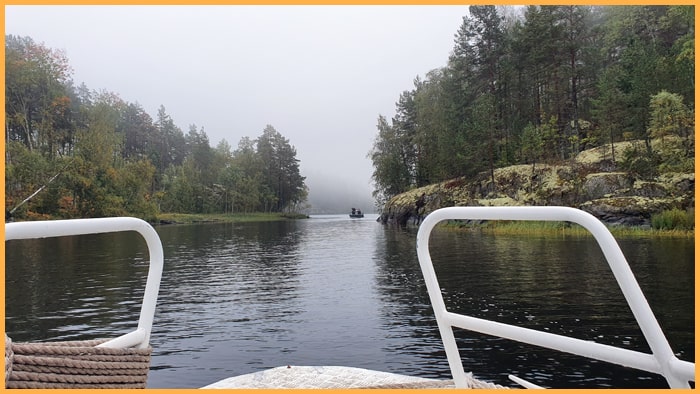 Day 1: St. Petersburg city tour
For the people from all over the world it is always interesting to have a wandering tour in the other country. And now they have such a blessing opportunity to see Russia from various sides. That is why today the journey starts with the meeting with members of our company as they take you to the center of the second capital of the country, St. Petersburg. And this is going to be the investigation of the city with visiting of such places as Ostrovsky Square, Vladimirsky Avenue, Vosstaniya Square, as well as walking along Mikhailovskaya and Bolshaya Konyushennaya streets. These streets were chosen for the idea of seeing famous Palace Square, Church of the Savior on Spilled Blood, Summer Garden and Troitskaya Square. Hotel then is offered for the night.

Day 2: St. Petersburg - Kiryavalahti
Of course guests are on the first place and our team is glad to offer the chance to see all of the amazing localities of the country, with the second day being devoted to the charming Kiryavalahti village. The village is located in the north of the region, which has certain history, telling us of the "Finnish era" of Sortavala. This is also the locality with the stone fortification, of Priozersk town. And all is placed in the Vuoksa River island. Having the walk along the territory like this, invitees see the beauty of the valley of waterfalls, the home of deer. For the next position to see here the Kirch Lumivaar is chosen. It is known to be the Finnish church of olden times. Night after the trip is prepared in the hotel.

Day 3: Kiryavalahti - Petrozavodsk
Today you are going to have a view of the beauty of the territory along the boat excursion of the Ladoga Skerries. Here you can notice mountain park Ruskeala and the White Bridges Waterfall, as these are the most fabulous locations here, and photo stops are right appropriate, for having captured memories. Going on, it is better to have a visit of the Kinerma village, one of the most interesting and beautiful villages, which even gained the title of the"The most beautiful village in Russia". Then we have prepared moving to Petrozavodsk town, where night is supposed.

Day 4: Petrozavodsk - Medvezhyegorsk
Medvezhyegorsk is our next aim of the trip, and it can be reached along the Murmansk highway, with seeing the Marcial water resort. Having the way along the territory of the country, guests are the ones to witness the very first reserve, which emerged long time ago in Karelia. Flora and fauna here have saved the original constituent. Along such an outing you are going to call a visit of volcano Girvas and the panorama of the Palozerskaya hydroelectric power station, so that then the hotel is offered for the night.

Day 5: Medvezhyegorsk - Zaonezhie - Kizhi Island - Medvezhyegorsk
As the way is made along the region, we have a tour of Zaonezhie. And it can be reached with sighting the olden chapel. Then guests continue their journey and have a view of amazing locality, Kosmozero village. It is seen as the old village, found in the south of the Kosmozero lake which is located on the Zaonezhsky peninsula in its turn. The next destination needed to be seen for sure is the worldwide known Church of St. Nicholas the Wonderworker (Khram Svyatitelya Nikolaya Chudotvortsa). Then we have decided to get to the Kizhi island, as here architecture of olden times, of traditional way is preserved. And it presented by wooden constructions. At night you travel along the Shungite deposit, in order of getting to Medvezhyegorsk, where hotel is ordered.

Day 6: Medvezhyegorsk - Gimoly
You have already understood that in Russia there are many villages, and the other one to be visited is Gimoly. The village is known for being the gathering of constructions of the olden times. Lunch then is offered on the shore of the lake. And of course the trip is organized then to the pearl of Karelian taiga, seeming to be the unique locality of the region, Lake Pizanets. Night is taken in the hotel of Gimoly village.

Day 7: Gimoly - Vegarus
Guests are offered to have breakfast and then start the investigation of Vegarus village, which is seen to be the unique and silent locality of the Loimolsky rural settlement. And the village is also known for being placed at the Suoyarvsky district. Having the trip along the Republic of Karelia, the view of the Votovaara mountain is taken. Now it is identified as the most strange and mysterious site, where many researchers come for investigations. Lunch is offered in Porosozero village for then getting to Vegarus village, as in the latter one hotel is ordered.

Day 8: Vegarus - Gardarika
The next destination is Gardarika, the protected area of Karelia. Taking the trip of 60 km from Sortavala town, the sight of meteorite lake Yanisyarvi, covered with pine forest. The region is known to be an extreme ecological one. The territory is the home for the Mount Hiidenvuori, or the Leshego Mountain in Finnish. For night we have decided to order the hotel-club Gardarika.

Day 9: Gardarika - St. Petersburg
This is the start for St. Petersburg back, the way to which is made along the museum of the rock garden. Then Puikkola village can be reached in 30 minutes from Gardarika hotel. The village is identified as the Kaalam settlement locality of the Sortavala region, where live about 500 people. Hotel is made for night in the city.

Day 10: St. Petersburg - Peterhof - St. Petersburg
We would like to show the beauty of Peterhof area, after breakfast. This is seen as the wonderful residence where buildings are made in French Versailles style. The place is known for the fountains of Upper and Lower Parks, with the most famous one as the "Samson". Then the view of the Great Peterhof Palace and the Monplaisir Palace is taken. We would like you to capture the idea of the latter palace as from here the sight of the Gulf of Finland is taken. Then for the return to the city, tourists can visit the Cruiser "Aurora" and the Strelka V.O. cape in the east of Vasilievsky Island. The route is also covered along interesting sites and streets, along with visiting of the Bronze Horseman monument, St. Isaac's Cathedral, Gostiny Dvor (Guests' Court). Hotel is ordered for the night.

Day 11: St. Petersburg - Airport
Early the morning you will be removed to airport.