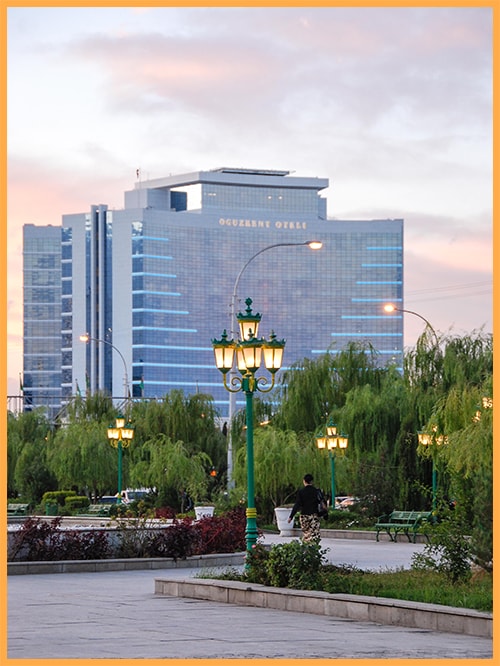 
Day 1: Ashgabat - Darwaza
Guide will meet and transfer you for sightseeing. At first you will visit "Old Nisa". It is the Sanctuary of Parhian Kings UNESCO World Heritage site. You will continue explore sights such as "Gypjak" Mosque and Mausoleum of the late President of Turkmenistan. After having lunch we will drive through the Karakum desert to Darwaza, where is the famous Gas Crater located. Staying in a camp for observing crater at daytime and evening. From it you will feel the heat and listen to the wind and the sound that this giant oven creates. Dinner in a picnic style. Overnight in a tent.

Day 2: Darwaza - Ashgabat
After having breakfast you will drive to Ashgabat. There you will continue explore the city. In the tour you will visit such amazing places as Ertugrul Gazi Mosque, Lenin monument and of course you will visit Russian Bazaar. Ertugrul Gazi Mosque is the most beautiful and interesting place in Turkmenistan. It was built in 1990 in the center of the city. This mosque can accommodate up to 5 thousand people. Decorated in the ancient Islamic-Byzantine style and amazes with its splendor and sophistication. Lenin monument is only saved monument to the leader of the world proletariat, which has been preserved in the capitals of the post-Soviet Central Asian republics. It is located in the very center of Ashgabat. In the Russian Bazaar you can learn more about lifestyle of the local people. Here you can take a lot of colorful photos and try to bargain. Dinner is at the restaurant. Night is in a hotel.

Day 3: Ashgabat - Mary/Merv
Today we will travel to Mary city. On the way you will visit Annau where you see the remnants of Seyit Jamal ad Din Mosque. Ruins were found in the 15th century. Then we will walk to Abiward or Abi ward. It is a prehistoric Sassanid city in modern-day Turkmenistan. Archaeological digs at the ancient city have been made in the last century. It is situated about 8 km west of the Kahka station on the territory of 12,000 m2. The height is 60 feet high and 700 feet round. We will continue our drive to Mary city. Merv in past times was situated at the crossing point of the Great Silk Road and later became one of the largest and biggest cities of the ancient world. Travelers will find mausoleums of Sultan Sanjar and Muhammed ibn Zeyd it shows unbelievable masterwork of 12th century. Rest is in a hotel.

Day 4: Mary - Ashgabat
We will return back to Ashgabat city. It is worth saying that, in 2013 the city was comprised in the Guinness Book of Records as the world's highest concentration of white marble buildings in the world. It was founded in 1881. On arrival you will have a city tour and visit parks and monuments, imposing mosque and other buildings. Night is in a hotel.

Day 5: Ashgabat - International Airport of Ashgabat
Transfer to the airport.