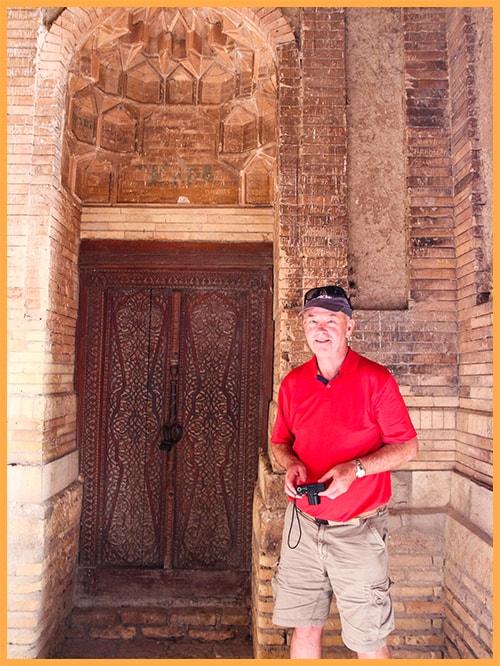 
Day 1: Ashgabat
We are happy to see you in Turkmenistan. Meet the guide at the airport and transfer to Ashgabat city. First you will visit "Nisa" (UNESCO World Heritage since 2007). It is about 18 km to the west from Ashgabat and oversee the ruins of Nisa, the capital of ancient Parthia. In the III century BC New Nisa was the capital of Parthia and the Old Nisa fortress was a grand residence at that time. The next destination of our tour is Ertugrul Gazi mosque. It is adorned with four snow-white minarets, and is alike in entrance to the well-known Blue Mosque, situated in Istanbul. The design of the Azadi Mosque is made in old Islamic and Byzantine style and assaults with its enormity and alteration. We will continue your way to the Gypjak, Ruhy mosque. It means "the mosque of Turkmenbashi spirituality" or "the mosque of spirit of Turkmenbashi". The mosque is located in Gypjak, the Turkmenbashi native village. The mosque is walled by 4 minarets. The height of the mosque is 55 m, and that of the minarets is 91 m to represent the year 1991, when Turkmenistan achieved independence. The building is available via 9 entries with arches. Transfer to a hotel for sleep.

Day 2: Ashgabat - Turkmenabad
The tour will start by travelling to mosque Seyit Jemaletdin, built in the XV century. The building was completely devastated by the Ashgabat earthquake and today it is in renewed version. The mosque is scratched with an engraving saying that this building was founded under Abul Kasim Babur, Temurid prince who was ruling in Khorasan (1447- 1457). The foremost portal arch is decked with forms of dragons. We will visit Abiverd, the ancient settlement of Turkmenistan along with Kunya Urgench, Nissa, Merv, Dakhistan and so on. In past times, Abiverd was an unconquerable fortress defending the townspeople from the attacks of nomads. Inside, in the center, near to the square there was a mosque initiated in the early 15th century. Later on we will visit Merv, one of the most ancient territories of Central Asia that presented irrigation system among the first. It caused to the creation of one of the major cities of ancient world as Merv (Margush, Margiana, Mary). The reporters widely used bright epithets calling it "a soul of a king, a mother of Khurasan cities, and, the city that helds the Universe. Omar Khayyam, As Samani, Imamaddin Isphakhani and other great academics of the Middle Ages lived there. Transfer to Turkmenabad. Night is in a hotel.

Day 3: Turkmenabad - Astana baba - Kerki village - Turkmenabad
Today you will visit Repetek biospheric reserve with its museum as well as Astana mausoleum. The mausoleum is a part of the honoring complex entailing of a mosque and a tomb. As a matter of fact, they are numerous buildings built in various periods. The mausoleum of Astana baba is a 11th - 12th-century monument of architecture. It is the place of "zyuarat" as an unvarying ritual of adoring of holy men perceived by visiting pilgrims. This place is defined to be healing. Overnight is in a hotel.

Day 4: Turkmenabad - Mary - Merv
We will drive to Merv, Merv oasis. It is 40 km from Mary. It is one of the most antique territories of Central Asia that announced irrigation system amid the first. It controlled to the establishment of one of the biggest cities of ancient world - Merv (Margush, Margiana, Mary). The origin of Merv is covered in secrecies. One fact is recognized for sure, however, the first written references to this city were found in Avestian records of about the 8-6th centuries B.C. The notes extensively used bright epithets naming it "a soul of a king, a mother of Khurasan cities, and, the city that held the Universe. Omar Khayyam, As Samani, Imamaddin Isphakhani and other great academics of the Middle Ages lived there. We will also visit Soltan Sanjar mausoleum, Erk gala, Gawur gala, Soltan gala, Kichi vs Uly gyz gala and so on. Rest is in a hotel.

Day 5: Mary - Ashgabat - Darwaza
In the morning we will drive to Ashgabat. Then we will visit to Darwaza which is also "The Gates of Hell." In 1971 when a Soviet drilling rig inadvertently stamped into a huge underground natural gas cavern, producing the ground to failure and the complete drilling rig to fall in. Having perforated a pocket of gas, venomous fumes began holey at an alarming rate. Nowadays it is very famous on a tour. Night is in a hotel.

Day 6: Darwaza - Ashgabat
We will drive to Ashgabat. We will visit water and mud crater and Yerbent village. In the evening you will have a city tour in Ashgabat. Rest is in a hotel.

Day 7: Flight
Have a safe flight!